The family Hydropsychidae is represented in Norway by eight species in two genera.

The species are small to medium sized with comparatively narrow, triangular forewings. The larvae inhabit streams and rivers with stony or gravelly substrate, and some species can be found in large lakes. They build fixed, plate-formed capture nets with associated retreats between stones. 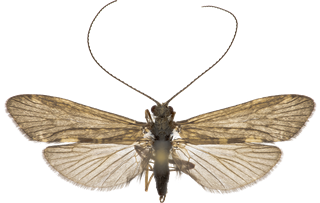